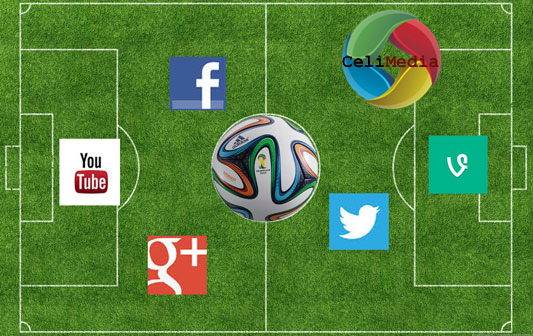 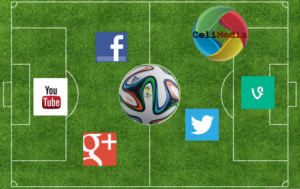 The social media impact on the World Cup proves what Celimedia has predicted: a huge impact with tremendous networking.

We’ve seen this happening on sporting events all the time, but this time, with the World Cup, it is being something colossal.

In the World Cup’s first week, Facebook had exceeded 450 million likes and comments. A massive score if we compare to what we saw happening on big events like the Oscars (24.5 million) and the Super Bowl (185 million).

Facebook recorded 1 billion interactions since the beginning of the World Cup. The number of people talking about the World Cup already reached 220 million. Facebook data has never measured something like this before.

The World Cup is proving to be a unique moment for the social media channels. The event is already hitting record highs of the social network without even having finished.

The players of the Brazilian team contribute to increase the engagement on the social network. The Brazilian star Neymar has more than 7 million “likes.”

Twitter registered 12.2 million tweets on the first game of the World Cup between Brazil and Croatia, most of that coming from the host country. By the way, Brazil has the fifth-most Twitter accounts behind the U.S., UK, Canada and Australia.

A few days before the World Cup 2014, Twitter had already more tweets related to the event that all postings during the 2010 World Cup in South Africa. Everywhere in the universe, instantaneously and on-the-go users had twitted more that ever.

Around an hour after the games, Twitter officially shows data through their account @ TwitterBrasil providing total number of tweets, the most often mentioned players, peak tweets per minute,besides the trending topics and issues of the day.

30 of the 32 nations competing in the World Cup this year have official Twitter accounts and Brazil has the most followers of all the World Cup.

Over 300 players on the World Cup are on Twitter also sharing backstage moments for their fans delight.

The hashtags are having a key role in the event. And if you want to be seen, advertise and network, you want to be there on the newsfeed generated by these hashtags because that is where everybody is! And Celimedia works hard to make sure that all her clients are well positioned on this newsfeed.

We’ve seen how sports bring people together during the whole history, but the social media giant numbers prove that social media is here to stay.

As we reach the end of the tournament and the games get more exciting and important, the social media reaction could get wider if that is even possible.

The World Cup has become a global party and Celimedia is part of it. Because we use social media to bring our clients to where they should be now, where the whole world is looking at, every day and all the time. A virtual display that allows us to reach within seconds so many viewers, showing them our clients services and bringing them prospective customers.

We wish that this World Cup will be one more great sport event, all the way until the end, and we wish the best for the best!